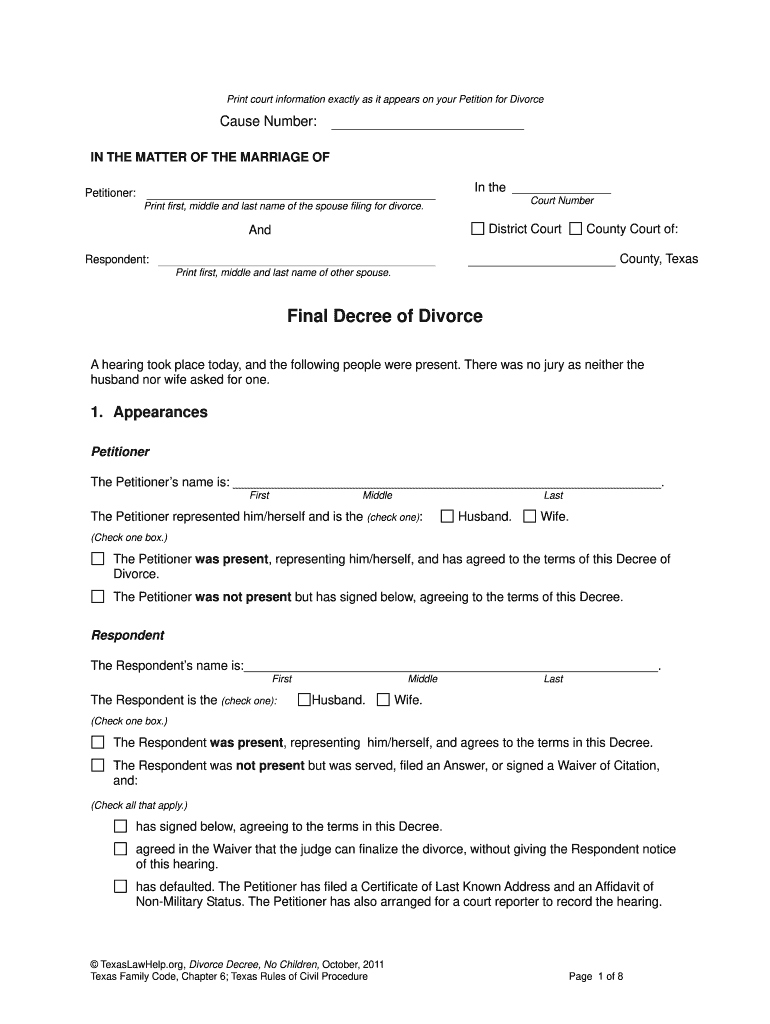 Get Form
Show details
Hide details
District Court And County Court of County Texas Respondent Final Decree of Divorce A hearing took place today and the following people were present. It is a good idea to confirm separate property obtained during the marriage as that individual s separate property in the Final Decree of Divorce. More information about community and separate property can be found in the Texas Family Code chapters 3 4 and 5. The Petitioner has also arranged for a court reporter to record the hearing....
Fill divorce decree texas pdf: Try Risk Free

What is for Final Decree of Divorce?

The Final Decree of Divorce is a form that is used to apply for a dissolution of marriage in the State of Texas.

What is Final Decree of Divorce for?

This form is used to provide information on husband and wife, who are petitioner and the respondent, that are involved into the dissolution of marriage at the court.

When is Final Decree of Divorce Due?

The Final Decree of Divorce has no due date. It is submitted whenever one of the spouses decided to officially dissolve the marriage.

Is Final Decree of Divorce Accompanied by Other Forms?

The form is a part of a package of documents that should be submitted while divorce process. The list of documents depends on the case, so you have to check it with your lawyer and requirements of your local court and other authorities if needed.

What Information should I Include in Final Decree of Divorce?

Information that should be included in the Final Decree of Divorce contains the following parts: 1) Identification of the petitioner and respondent and their appearance at the court while submitting the Form, as well as record on hearing and jurisdiction; 2) information on children, if the couple has minor children; 3) grounds for divorce; 4) property issues of both spouses and debts, if there are any; 5) change of the name after divorce, court costs issue and other orders. The Form has to be signed by the judge, petitioner and respondent.

Where do I Send Final Decree of Divorce?

The Final Decree of Divorce has to be submitted to the court in the State of Texas.

Video instructions and help with filling out and completing final divorce decree texas
Instructions and Help about final decree of divorce texas form
Hi this is Joe from how to file for divorce org, and today we're going to file for divorce in the state of Texas so if you just come along we're just going to go right down this step-by-step guide and just go through these one by one so step one is to download the Texas divorce papers by clicking on this link right here, and you'll download all the necessary Texas divorce papers it will go through in the next following steps step two the spouse that has decided to file for divorce which is means the other spouse can be the one to take the lead and file for divorce in Texas but the person that does needs to file a Texas divorce petition pay the filing fee of two hundred and sixty dollars now this is the state Feint here could be other county fees, but most counties are two hundred and sixty dollars and also tell the clerk specifically that your other spouse will complete a waiver of citation now we go on to 7/3 after filing in step two you must send a copy of your file divorce petition as well as the waiver of citation that you mentioned to the clerk in step two an original, and you need to send that spouse one copy so the non filing spouse then needs to have the waiver of citation notarized and if you don't know what a form getting notarized is its fine it's just a witness that's pointed by the state there's one every branch bank in the United States so all you'll have to do is have your soon-to-be ex spouse sign one of these waiver of citations in front of a notary at a branch bank, but it can be anywhere a notary is found and that needs to be filed with the clerk so once these first three steps are done you're really ready to head into what I call the meat and potatoes of the divorce process which is negotiating all the financial terms and which will all be in step four and so you really should both meet and have you're going to be filling out what is the final decree of divorce as well as the following now these are all just attachments to the final decree of divorce so for example if you have children you need to fill out some of these that have to do with children such as the child support order and the last one here employers order withholding from earnings for child support, so these are all that you want to just go through together, and you don't need to file these, yet you just need to have these all completed at this time because you're still waiting from the time that you first file the petition there are 60 days when you have to just be on hold and the core kind of gives you this time to get all these steps done so if you have children moving along if you have children after you've agreed on the terms of the divorce decree as here you will have to attend parental divorce education classes and yes I know these are very annoying, but you have to do this, and you might not want to do it until after you've negotiated all this so that you know that your divorce is actually going to be happening in the near future there are divorce...

Take advantage of the catalog below to get the court form you need. Search for it using keywords and fill it out, right from your browser. Complete fillable fields, add images, and sign the document with a legally-binding e-signature. Find anything court-related: civil, tax, or criminal case forms, various tribunal templates, and many more.

File not found
The requested file was not found on our document library
Find the right form for you and fill it out:
texas decree pdf 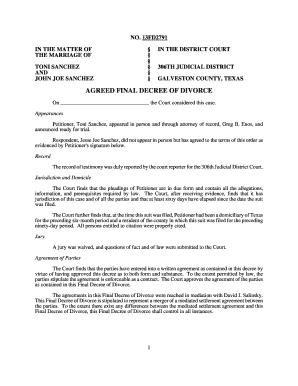 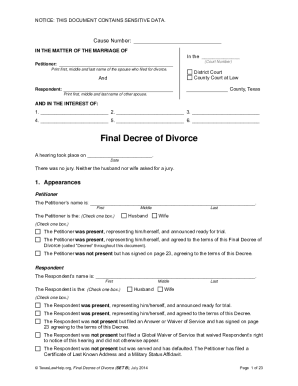 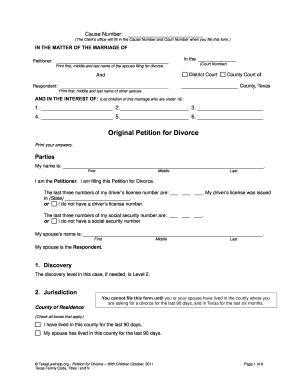 Search results
No results. Please check your spelling or try another term.
Not the form you were looking for?
Related Forms
texas decree pdf